IcePoint™ runs! The year ended on a high note as Rebound ran the first closed loop, freeze point suppression heat pump in existence. That might not mean much to you readers, but believe me, it means the world to the Rebound team. It’s what we’ve been striving for since we thought of the concept back in early 2012.

Nothing shows how exciting the end of our year was quite like the actual experiments, so I’d like to share the latest results with you. Here’s the data from the latest run, distilled into the three-minute summary: 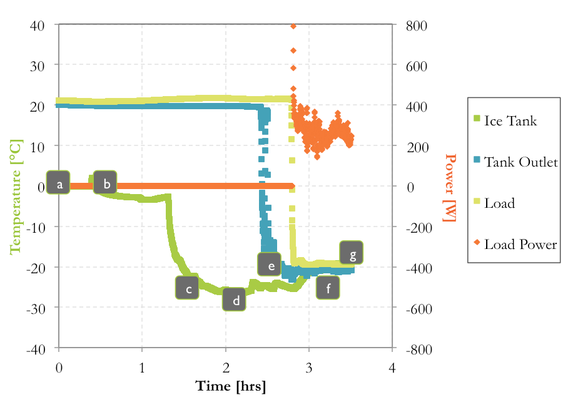 Here is how we run IcePoint™:

Step One: Make ~20 gallons of ice overnight with the ice maker.
a.  You can’t see ice generation on the graph but you’ll notice the ice tank temperature starts off at 0°C.
b.  Nothing much happens for the first hour as the separation system (also not shown) goes through the preliminary warm up stage.

Step Two: The ice and FPS mix together and get really cold.
c.  This temperature drop occurs as concentrated FPS is added to the ice tank.
d.  Nothing more happens for another hour as the separation system is prepared for normal operation. We’re going to automate the startup process to  cut down this prep time.
e.  About two and a half hours into the run, the cold, dilute FPS slurry begins flowing from the ice tank to the separation system (note the tank outlet temperature drops from ambient temperature down to the cold FPS slurry temperature).

Step Three: The dilute FPS slurry is melted as it absorbs heat from the load (ie: the freezer).
f. This melting happens as slurry flows through the system to the simulated freezer, causing the load (freezer) temperature (light green) to drop precipitously. You can see the load is running at an average of -21°C (dark blue and light green lines) and requires about 275W of chilling power (orange line) to stay cold. That’s about one door’s worth of cooling at your local supermarket. Our final goal is to provide a stable -30°C slurry temperature.

g. Now, what makes this data really unique is that nothing is warming up as we add heat just like a normal supermarket display case. The stable temperatures at the end of the run indicate that IcePoint™ is constantly adding new concentrated FPS to the tank, mixing it with the ice, forming dilute FPS slurry and continuing the closed-loop process.

Altogether, the lab-scale prototype has been a great success! The freeze point suppression cycle concept has been proven technically feasible and we have a specific implementation that’s ready to upgrade to the commercial scale.

The results above were built on six months worth of major upgrades to our prototype system. Most importantly, we A) replaced the freeze point suppressant (i.e., the fluid that makes the ice melt at such a cold temperature and moves the heat around) and B) replaced the equipment used to separate the water from the dilute FPS mixture. In earlier posts we mentioned that the original membrane separation system wasn’t performing up to our initial modeled projections. We tried off-the-shelf membranes, consecutive steps of off-the-shelf equipment, off-the-shelf equipment plus special fluids, combinations of fluids separated by several different pieces of equipment. The science said the dilute and concentrated solutions were close together, energetically speaking, but the engineering said the path to get from one point to the other was long and meandering (for you techies, more about this in a future post).

In the interest of proving IcePoint™ feasibility, we picked a well-known freeze point suppressant that everyone knows how to concentrate from water: ethanol. We built a distillation column similar to one you’d find at a vodka distillery (but plastic instead of copper because we don’t care how it tastes). We made a few modifications so it operates at lower temperature, which lets us use waste heat to drive the separation. It works well and we already set up a commercial vendor to supply the full-scale version. Over the next few months, we’re excited to test some ideas for FPS fluid additives that will increase the energy efficiency and simplify the hardware.

With the success of the lab-scale prototype, we’re shifting our focus to building and testing a commercial system. In between, we’ll make incremental improvements in the lab. The entire IcePoint™ team is headed to Hawaii in January to focus on commercialization as participants in the Energy Excelerator. Then we’ll start on the commercial scale system!