LAB NOTEBOOK: THE EVOLUTION OF A DISTILLERY

In my last post, I alluded to some fun (read: bang-my-head-against-the-wall) work leading up to the switch from membrane distillation (MD) with salt brines to simple column distillation with ethanol. That process led to lots of technical discovery worth sharing here.

To frame the discovery process let’s start at our high-level process goal: separation drives the FPS cycle[1] in the same way that a compressor drives a vapor compression cycle. This step converts the external energy source (waste heat or electricity, respectively) into a form that is useful to the cycle. That useful form can be described as chemical potential, in the form of high pressure for a vapor compression cycle or high concentration for an FPS cycle. In an FPS cycle, this step is theoretically pretty simple: all we have to do is overcome the Gibbs energy of mixing. Let’s look at a graphical representation: 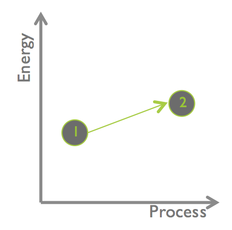 Here, point one represents the dilute solution (water mixed with a bit of FPS) and point two represents the separated fluids (pure water and concentrated FPS). To conduct the separation, we have to supply energy to get from point one to point two in the form of heat because we’re moving up the energy axis. Easy-peasy, right?

About now you might be thinking, “But Luke, warming up a cup of saltwater doesn’t cause it to spontaneously separate into pure water and concentrated salt!” There lies our challenge. In the case of separating water from salt, we must reach a very high energy point during our process before we can get to our target. We can separate our cup of seawater a few ways. The easiest one is sticking the cup on the stove where water boils out of the mixture, leaving more concentrated saltwater below. Let’s modify our graph to show this process: 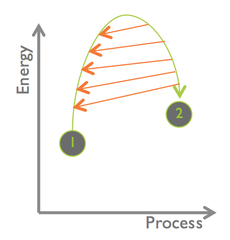 Now, we’re working from the same beginning and end points, but, following the green arrow through the process, we’re peaking on the energy axis at boiled water vapor before coming back down to our separated liquids[2]. We had to add a ton of energy as we go up the left side (boiling) but then we have to throw away a bunch of that energy coming back down the right side (condensing). Suddenly, the separation step requires a lot more energy and equipment. We have some tools to mitigate that though. As the orange arrows indicate, sometimes we can recuperate some of the heat.

This is precisely how membrane distillation, our original design, works. In a membrane distillation process, the warm salt water produces water vapor that can fit through the tiny pores of the membrane. It condenses on the other side, releasing the enthalpy of vaporization. We can arrange the membrane to recuperate that heat: the condensing side sends the heat of condensation to the water going into the warm side, preheating it.

Once again, we’ve got a nice working scheme, right? We thought so and were confident enough to build our prototype based on this idea. But then the experiments didn’t quite live up to the models.

The trouble was in how the recuperation effectiveness changed the overall process efficiency. If we recuperate all of the available heat perfectly, then we only have to supply enough energy to overcome the mixing. We lose any heat from the condensation process that we fail to recuperate and have to supply additional energy to make up for it in the evaporation step.

The evaporation process requires 30 times more energy than the separation, as indicated (but understated) in the diagram. Our model suggested that we were going to be able to recuperate about 28 times the theoretical energy required for separation with the remainder being lost to the inefficiencies of the process. Adding that loss to the actual separation, we predicted we would need to add three times the theoretical separation energy to perform the real process. You can see these graphed below in the “predicted” bars which include the losses predicted in the model.

Looking back, there were several potential sources of these small errors. A few options: small differences in the membrane thickness could reduce the heat transfer rate of the recuperation; the enthalpy of mixing could have just been higher than the literature value; the vapor pressure model could have been based on incorrect data.

So the ultimate problem was imperfect data going into the model or an imperfectly characterized membrane, which creates small errors in the recuperation effectiveness, which in turn creates large errors in the separation efficiency. To solve this, we decided to replace the salt and membrane system with one that we knew everything about: ethanol and a column still. Ethanol’s properties have been measured as much as any other fluid. Ten different companies will sell us a variety of stills off the shelf and they come with performance guarantees. We might not be able to maximize recuperator effectiveness as well, which will cut into the efficiency a bit. But we’ve discovered that what counts today is knowing exactly what those effectiveness and efficiency numbers are so we can quickly and reliably deliver a working prototype.

[1] If you’re new or don’t remember, FPS = Freeze Point Suppression. That’s the cycle we developed here at Rebound.  We also use FPS to mean freeze point suppressant, ie, the chemical that mixes with water to causes the water to melt at a reduced temperature.